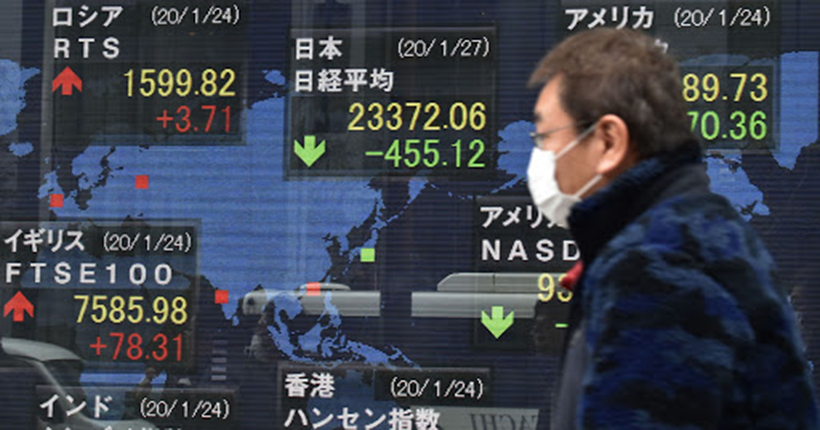 The coronavirus outbreak has closed factories, curbed spending and disrupted supply chains in the world’s second-largest economy. But U.S. stocks have held close to records.

The market’s resilience has surprised many money managers, especially given how quickly the epidemic has spread and how difficult they say it has been to assess the accuracy of information coming out of China.“We’re surprised at how sanguine the market is,” said Sharmin Mossavar-Rahmani, chief investment officer of Goldman Sachs Group Inc.’s private wealth-management group, adding that “realistically, the data are very, very uncertain.”

Markets had initially lost ground after officials reported the outbreak had spread beyond China’s borders. The S&P 500 dropped 3% between Jan. 23 and Jan. 31, while the Stoxx Europe 600 lost 2.2% over the same period. China’s Shanghai Composite Index dropped 7.7% on Feb. 3, its steepest one-day decline in more than four years, after reopening following the Lunar New Year.

Just weeks later, though, markets have managed to claw back much, if not all, of their losses.Companies that were among the worst-hit by coronavirus-related selling last month have recovered in recent days. Carnival Corp. ’s Diamond Princess cruise ship, which is docked in Japan, has been struck by more than 100 coronavirus cases over the past month. Carnival shares are up 2.4% for the week—outperforming the S&P 500, which has risen 1.4%.Wynn Resorts Ltd. owns a luxury casino resort in Macau, where officials have asked operators to suspend operations for now. Its stock is up 5.3% for the week.Even commodities prices have stabilized after an initial rout. The price of copper, which many investors view as a gauge for global economic activity, has pared declines to trade at its highest level in around three weeks.

The rally has divided money managers and analysts. Some believe the market rebound is justified, pointing to research showing the long-term impact of prior outbreaks has been muted and a sense that the epidemic is being contained effectively. Others are less convinced.

“We have to remember that stock markets are not particularly good at pricing in these types of risks,” said Dario Perkins, managing director of global macro at market-research company TS Lombard.

Much of the market’s rebound appears to have been fueled by relief over Chinese officials unleashing a wave of spending to help relieve the pressure on the Chinese economy, analysts and investors say.

The People’s Bank of China deployed 1.7 trillion yuan in open-market operations on Feb. 3 and 4. Not coincidentally, many global stock indexes bottomed out around then. The Shanghai Composite rose every single trading day from Feb. 4 to Wednesday, logging its longest streak of consecutive gains in more than a year. The S&P 500 has also pared losses, closing Thursday up 4.4% for the year and just shy of a record.

“When you have the announcement from Beijing that they’ll be injecting fiscal and monetary stimulus, the expectation is that they’ll continue to do so until they see the economy rebound,” said Quincy Krosby, chief market strategist at Prudential Financial Inc.

Evidence that Beijing is willing to roll out further stimulus has been reassuring to many money managers, especially since the fate of the global economy has become intertwined with that of the Chinese economy. China accounts for almost a fifth of global domestic product when adjusted for incomes, according to the International Monetary Fund, meaning slowdowns there have the potential to cast a pall over the rest of the world. The coronavirus outbreak has sickened tens of thousands of people world-wide, strained China’s medical system and disrupted supply chains at multinationals ranging from Apple Inc. to General Motors Co.

So far, though, economists believe the long-term impact of the epidemic will likely be relatively muted. Among S&P 500 companies, just 5.8% of sales are generated from China, compared with 62% from the U.S., according to FactSet.

Globally, Goldman Sachs economists have shaved 2 percentage points off their estimate for first-quarter growth, citing expectations for weaker growth in China, less spending among Chinese tourists and a drop-off in Chinese imports. But they believe economic activity will likely recover at least partially in the following quarters.

Those who worry the market’s rebound might not be on the sturdiest ground caution that such projections assume that the outbreak will be contained in the coming months, that central bank stimulus will be enough to offset a slide in manufacturing activity and spending, and that the trajectory of the current coronavirus epidemic will be similar to prior outbreaks. Those assumptions might not necessarily turn out to be true, TS Lombard’s Mr. Perkins said.

“How many basis points [of interest-rate cuts] does it take to control a global epidemic?” he said. Mr. Perkins added that he questions the accuracy of data on the outbreak coming out of China.

Lingering skepticism hasn’t stopped the market from rallying, though.

Nancy Tengler, chief investment officer at Laffer Tengler Investments, said her company is still invested predominantly in U.S. stocks, based on the belief that the domestic economy is strong enough to withstand unexpected shocks like the coronavirus outbreak. Data have shown U.S. employers continuing to hire at a steady clip, corporate profits coming in better than analysts had expected and consumer spending looking solid.

“What people are counting on is that [the outbreak] will be containable,” Ms. Tengler said.