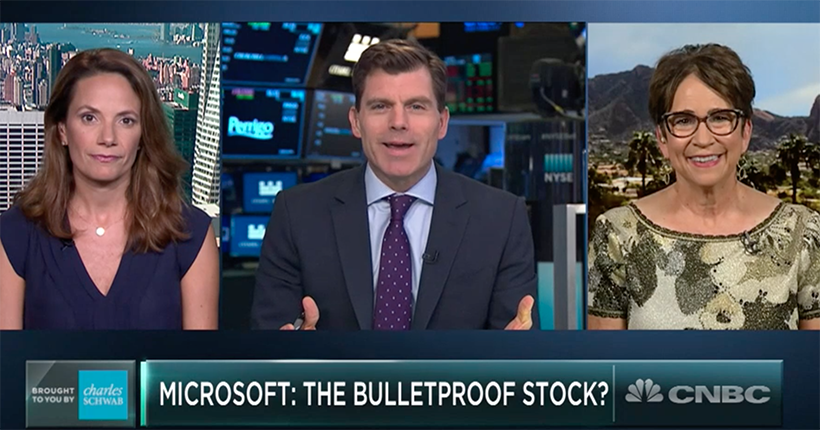 Microsoft, the world’s largest publicly traded company, could get even bigger. The tech giant is reporting earnings after the bell Thursday, and one technician sees a breakout ahead.

“Microsoft is really a momentum story and has been for more than several months now. It’s a long-term uptrend, it’s an intermediate-term uptrend,” said Katie Stockton, founder of Fairlead Strategies, on CNBC’s “Trading Nation” on Wednesday.

Microsoft has surged 34% this year, outpacing the XLK technology ETF’s 30% gain and the S&P 500′s 19% advance. It has nearly doubled in value over the past two years.

“The stock, of course, having been where it has been, has a lot of support. Initially, it’s right around $131. It doesn’t mean it has to get back to that level, but it certainly would be very safe, in terms of preserving its uptrend on a pullback of that magnitude,” said Stockton.

The stock broke above $131 in early June and has held above $135 this month. It would need to fall nearly 4% to return to Stockton’s $131 support level.

“The last breakout that we had from Microsoft on the chart yielded a very aggressive, and maybe too aggressive, long-term target of about $156 for Microsoft — so, that shows you potential upside when you don’t have any resistance left on a chart,” she added.

Microsoft would need to rally another 15% to reach $156. It would mark a fresh record for the stock.

“We see the company hitting on all cylinders,” said Tengler. “Azure is growing at, you know, 70%-plus year over year. We expect them to beat this quarter. If you look at the surveys from customers, at the margin, business is moving to Microsoft away from Amazon. So, we think that is the primary source of the good news.”

“We still like this stock. It’s one of our largest holdings, and we’ve been trimming it as it continues to appreciate, but it still represents almost 5% of our holdings,” said Tengler.

Analysts anticipate a % increase in earnings and 9% sales growth for its fourth quarter, ended June, according to FactSet estimates.

READ THE ENTIRE ARTICLE ON CNBC