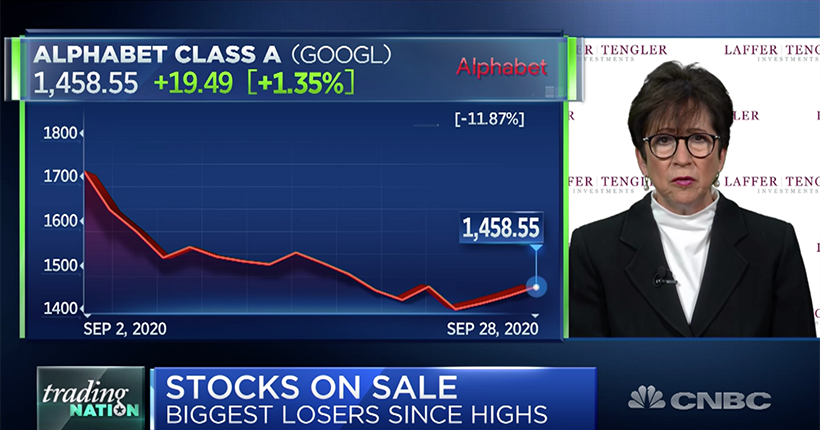 The benchmark index is up 1% this week, which if it holds would be its first positive week in five. However, it’s still 7% below its early September record high.

Several of its stocks — including Halliburton, Wynn Resorts, Citigroup, Alphabet and Kraft Heinz — have performed even worse. Halliburton has fallen by more than 25% since the peak.

Delano Saporu, founder of New Street Advisors, is buying the pullback in one of the stocks that have retreated.

“We’re looking at Alphabet so you can talk about the financials, they’re obviously strong, but a couple of other tailwinds that I see are the ad spend and ad revenue,” Saporu told CNBC’s “Trading Nation” on Monday. “Companies are starting to loosen the belt when it comes to ad spend and ad revenue, which is the majority of their revenues.”

In the second quarter, Alphabet reported its first ever year-over-year revenue decline, down 2%. However, Chief Financial Officer Ruth Porat said during an earnings call that advertisers had begun to increase spending.

“We also talk about the uphill battle that they have in cloud, but I think any increase that you see in that will be great for shareholders. So they’re battling Microsoft, they’re battling Amazon when it comes to the cloud revenue, but I think they can make headway in that space,” said Saporu.

“We’ve been pretty big advocates of technology. I don’t think that coming out of the other side of the pandemic that individuals or companies are going to use technology less. So we still like the group. We’re just looking for companies that are growth at a reasonable price, not growth at any price,” Tengler said during the same “Trading Nation” segment.

Tengler added that Alphabet’s valuation makes it attractive. Alphabet trades at 27 times forward earnings, higher than the nearly 22 times multiple for the S&P 500. Alphabet earnings, however, are expected to rise by 15% from fiscal 2019 to 2021; over that same stretch, the S&P 500 earnings are forecast to rise 2%.