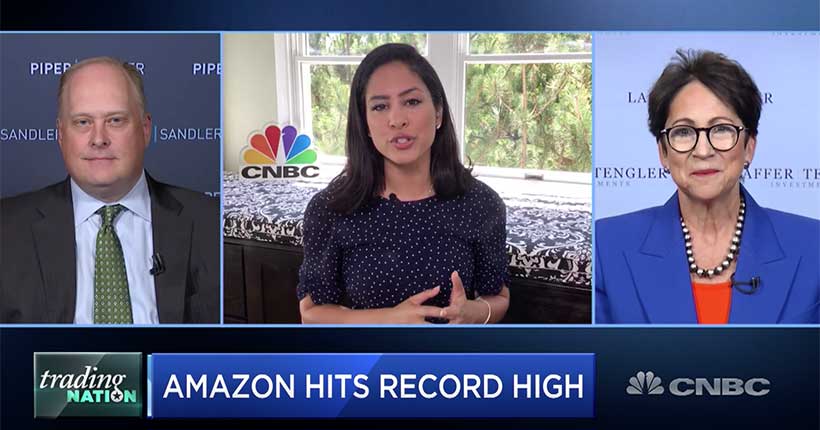 The 2020 move alone has boosted CEO Jeff Bezos’ net worth by $57 billion, more than the total net worth of Tesla CEO Elon Musk.

Even with its massive gains, the stock still looks like it could run higher, two traders said Thursday.

“While it’s not cheap, it’s not very expensive,” Nancy Tengler, chief investment officer at Laffer Tengler Investments, said on CNBC’s “Trading Nation.” “The company is benefiting from super-fast sales growth, up 26% year over year, and that’s been able to support the price at these levels, according to our valuation work.”

Tengler said her firm was “poking around” the stock of Amazon at its current levels — watching and waiting for a better entry point. She said investors should be watching two of the company’s chief catalysts.

“One [is] margins, which have been compressed because this faster growth is coming in the lower-margin space, and then secondarily, [Amazon Web Services] is sort of redoubling their efforts in trying to acquire military contracts,” she said. “I think they’ve really felt the pinch from Microsoft’s cloud business growing at a faster rate.”

“On a weekly basis, the shares not too long ago broke out of a big multiyear consolidation. Your momentum is very positive,” he said. “The stock has also been outperforming the S&P 500. So, portfolio managers who are looking to play some catch-up need stocks like this.”

Johnson noted that Amazon is trading above its average analyst price target of $2,803.75, which could create another tailwind for the stock in coming weeks.

“I suspect when the next earnings season starts, this is a stock where these analysts, which primarily are all bullish, are going to have to be raising their price objectives,” Johnson said. “And if I just look at a chart and sort of measure things out, … [$3,400], 3,500, sort of at minimum, seems like a price objective of where this stock could ultimately go to. So, we’d still be a buyer of Amazon shares in here, bottom line.”

A run to $3,500 would represent a more than 21% increase from Amazon’s Thursday closing level.