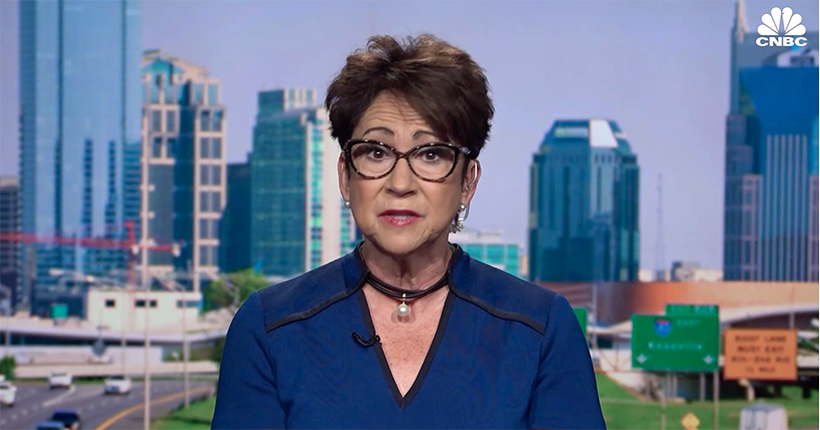 The company reported better-than-expected earnings Tuesday evening, sending the stock up 4% on Wednesday.

For the first time since 2012, iPhone sales did not account for over half of the company’s total revenue. Instead, Apple reported strong growth in wearables and services.

Are signs pointing to a brighter future for Apple? Here’s what four experts, including CNBC’s Jim Cramer, thought of the report.

Ed Snyder, managing director at Charter Equity Research, said Apple needs to broaden out iPhone usage into the mid-tier market, so they can continue growing.

“It’s slightly better than expected, but with the services as a higher mix, and their gross margin continuing to decline, [it] kind of suggests what’s going on with [the] iPhone — it’s fading a bit. There is speculation they’re going to enter a more mid-tier market beginning of next year — which would be a very good thing. Ultimately they’ve got to expand their reach of iPhone beyond the high-end and try to move into the mid-tier to sustain the consumer base for the services businesses. If they’re able to do that, things will work out. If they’re not, they’ll start to ebb … We’ll see how the fall launch goes, which is a lot of eyes toward how successful the new phones are.”

Nancy Tengler, chief investment officer at Butcher Joseph, sees the move away from iPhones and growth in wearables as a good sign.

“I think it was a great quarter in this regard … Very quickly the company has grown away from the iPhone being super dominant in terms of total revenues. I thought the services numbers were just a tad weak. China was very encouraging, in terms of a slowdown in the sequential decline. And I think wearables is a bright spot for the ecosystem. So, in general, I think the little bits of bad news were offset by some powerful news in other segments. And then you can’t argue with the margins — it’s impressive.”

“Mad Money” host Jim Cramer said the report gives those who see Apple as only a cellphone company a lot to think about.

I think what people like, frankly, is that if you have to back out this number, and then you back out that [number]—what really you get down to is services … You’re talking about wearables and services amounting to be in a Fortune 50 company. The smallest company in a Fortune 50 company is about a $62 billion company. Still not enough to please those who say it’s only a cellphone company. But, I think a lot to think about going down the pike, particularly with the credit cardright on the horizon. Well, you did have a one-time gain last year that you’re lapping, and you also did have … a big currency swing. I mean, I could understand if you just used currency you could probably get around 15% increase, … but the idea that it was going to be at 12% where Toni Sacconaghi was just kind of the most tepid bull in history thought it might be—that didn’t happen. So, I think the analysts are going to back out and do some of the calculations that I mentioned, and try to … be able to guide 16 to 18[%], which again is very good considering the size of it. You’re right about wearables, it’s awful low base, but everything that starts, is in awful low base when it begins — and that’s how I view this quarter. ”

Gene Munster, managing partner at Loup Ventures, said Apple proved critics wrong across the board, and is in a positive turning point.

“Well, they proved, once again, the critics wrong. You just go down the line, whether it’s revenue, China, profitability, wearables, the guidance … And I want to put a finer point on the guidance, if you take a typical beat it implies that they’ll grow revenue by 2% in the September quarter. … That will be the first time in a year that it will have grown revenue. But it’s beyond the September quarter. The real tell here if we start to fast-forward into December, the [comparables] of course get much easier. So, I think that this is going to be a turning point to the stock, given how easy it gets for the first three quarters of next year, and separately 5G coming. It just seems to be clear sailing, and I suspect there’s going to be a lot of analysts who are going to be wringing their hands over what’s the proper multiple for Apple, and this multiple will continue to inch higher in the year to come. ”