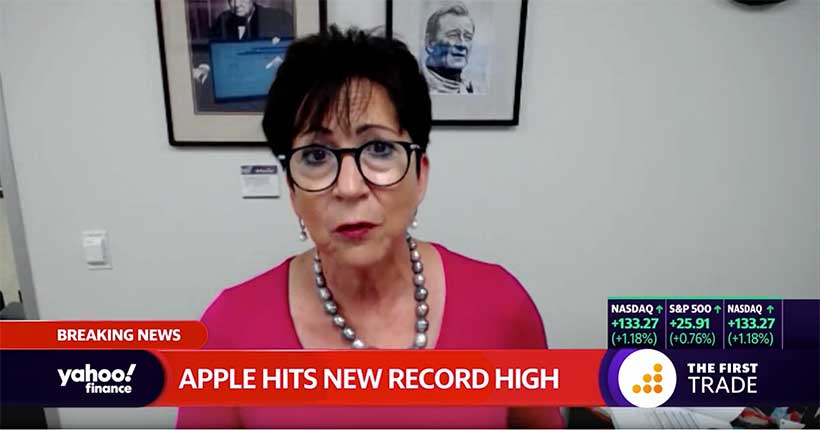 The latest rip-roaring run in Apple’s stock (AAPL) may be more speculative than chock-full-of substance, making it ripe for a short-term pullback argues one shareholder.

“We do think there’s good news [from Apple] on the horizon, but this rally feels very speculative to me. It feels very Robinhoody — people trying to get in before the four-for-one stock split,” argued Laffer Tengler Investments CIO Nancy Tengler on Yahoo Finance’s The First Trade. Tengler’s firm is a long-time shareholder in Apple but has been selling into the recent rally.

“I think we will see a pullback [post split] and investors will turn their attention somewhere else. But Apple’s services is a great business and it continues to grow,” added Tengler.

While Tengler is more measured on the stock headed into its Aug. 31 split, she remains upbeat on the company’s longer term prospects as it trades people up to 5G iPhones and rakes in the cash from various services.

To be sure, optimism on Apple’s future is running at extreme levels.

Last week, Apple became the first U.S. company to surpass the $2 trillion market cap level. Apple shares hit the mark by surpassing $467.77 early during the Aug. 19 trading session. Since then, the stock has continued to trade with an upward bias — shares fetched $506 a share in afternoon trading on Monday.

It has gained an impressive 73% this year, according to Yahoo Finance Premium data. But to top Tengler’s point, Apple’s valuation has become rich. The stock trades at about 31 times forward earnings estimates, a more than 10-year high.

Nevertheless, Apple’s achievement comes quickly after the company’s valuation eclipsed $1.5 trillion in June. The company makes up an astounding 7% of the S&P 500.