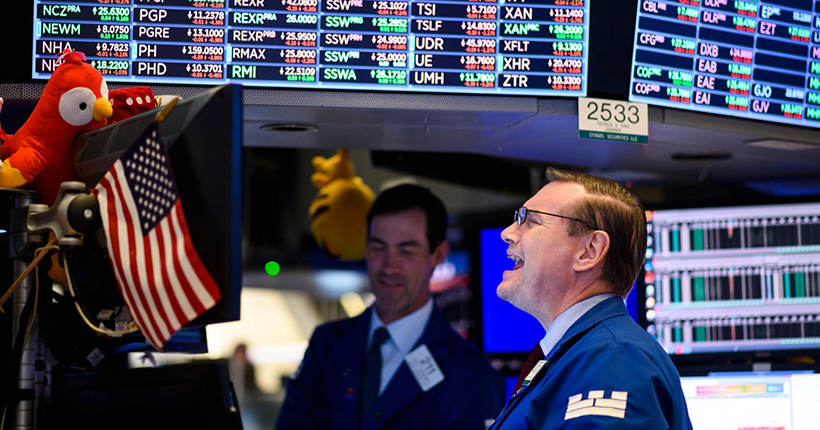 The U.S. stock market concluded the decade in record territory, a boom that emerged from the wreckage of the financial crisis but left on the sidelines the millions of Americans without money to invest.

The Standard & Poor’s 500-stock index, which tracks the biggest American companies, has registered a total return of about 256 percent, or 13.5 percent annually, since the beginning of 2010, according to Howard Silverblatt, senior index analyst at the S&P Dow Jones Indices. That compares with an average annual total return, including dividends, of 10.3 percent since the 1920s, he said.

The stock market has contributed to a high degree of economic satisfaction across the country, on top of a very low unemployment rate and modest but steady economic growth, surveys show. People who got into the market early in the decade, or even joined more lately, will have seen their retirement assets, college savings and other investments increase measurably.

Yet not only did the prosperous decade leave many Americans behind — 52 percent of Americans own stocks, largely through retirement accounts, according to the latest Federal Reserve data — it also fits into a much more uneven economic picture.

Emerging financial challenges such as the explosion of student debt and, until the past few years, highly disappointing levels of wage growth meant many Americans may have had less to invest in the first place.

“Unfortunately, the bulk of investors don’t have enough money in their retirement accounts to retire on, even though they just lived through a fantastic decade,” said Daniel Wiener, chairman of Adviser Investments.

In addition, Americans who sold in the financial crisis of 2007 to 2009, or lost their home to foreclosure, would not have had as much of a chance to take part in this decade’s boom. Retirees who shifted money into fixed-income accounts saw paltry returns as interest rates sat at historic lows.

“People who retired and thought they would live on their fixed income have become Walmart greeters because the income wasn’t enough,” said Nancy Tengler of Tengler Wealth Management.

Even those who did enjoy the roaring markets may look at the five- and 10-year returns on their investment accounts and formulate unrealistic expectations about what the future might hold.

The starting point for the past decade’s boom was the recovery from a massive financial crisis and the deepest recession since the Great Depression. What followed were extraordinary levels of action by policymakers to lift the economy and the markets.

That included trillions of dollars in public spending, authorized by members of both parties, and an unprecedented campaign by the Fed to boost economic growth and asset prices through low interest rates and other means.

Those policies continued under the Trump administration, which pushed through a massive tax cut. Meanwhile, after raising rates for several years, the Fed began cutting them again in 2019, moves that helped the markets break records.

Soaring markets have minted a new generation of millionaires, aided by high-growth technology companies such as Apple and Netflix.

The number of households worth $1 million, not including their primary residence, grew to 11.8 million as of one year ago, according to the Spectrem Group, a Chicago-based market research firm. That is an increase of 51 percent over 2009, with 2019 yet to be counted.

“The decade was about the capitalists,” said Joseph LaVorgna, chief economist of the Americas at Natixis. “People who own capital did the best.”

The sector far outperformed any other category in the S&P 500, tripling its worth over the past 10 years to more than $6 trillion, according to the S&P data.

Home values, the decline of which sparked the financial crisis and subsequent recession, have rebounded from their February 2012 low, when they had lost 27.4 percent of their value, according to the S&P/CoreLogic Case Shiller national housing index.

Home prices are now 14.9 percent above their pre-crisis high from July 2006.

“Low interest rates have kept mortgages affordable for qualified buyers, and that, coupled with the strength of the economy, has helped housing prices recover,” said Craig Lazzara of S&P Dow Jones Indices.

Baby boomers, born between 1946 and 1964, represent the lion’s share of millionaires, many of whom were able to take advantage of the decade-long bull market.

Those who had money in stocks leading up to the 2009 financial crisis, and who left those assets in the market, rode the wave up from what had been a generational low.

Retired executive Fritz Gilbert, 56, lost a third of his savings during the 2009 crash but kept on buying stocks. Now he counts himself in the millionaire cohort.

“I made up the one-third I lost and have seen another 50 percent gain on top of that,” said Gilbert, who writes a retirement blog. “Those who didn’t panic and were patient have been rewarded the last 10 years.”

Succeeding generations, from Generation Y to millennials, may have to wait to weather a bust to fully exploit the next market boom.

Laura van de Geijn has been saving the maximum in her 401(k) retirement account for the past three years.

The 31-year-old executive with a Washington real estate management company caught enough of the current bull market’s momentum to triple her savings to around $70,000. She knows a recession will probably whack her stock holdings.

“This is a long game,” van de Geijn said. “I am looking at 30 years, and I need to continue to slam that money into my 401(k) and hope for the next boom decade.”

The 126-month-long economic expansion that fueled the gains is now the longest on record. The bull market began in the throes of the 2009 crisis, which was caused by an overvalued, oversold housing market that turned trillions of dollars in mortgage-backed securities held by banks and investors around the world into toxic assets.

“Who would have thought that after suffering through a near-60 percent decline in the S&P 500 through early March 2009, the worst bear market since the Great Depression, the bull would still be alive and kicking 10 years later?” said Sam Stovall of CFRA Research.

In recent years, the stock boom has been marked by bouts of severe volatility, exacerbated by tweets from President Trump. The president has sent stocks spinning by calling Fed Chair Jerome H. Powell an enemy of the United States and repeatedly threatening China, Mexico and Europe with tariffs. Investors also dodged several bear maulings, such as the ones in 2011 and 2018.

The U.S. stock market fell 3 percent this past August after a reliable predictor of looming recessions flashed for the first time since the run-up to the 2008 financial crisis. But healthy corporate earnings, Fed rate cuts and an unemployment rate of 3.5 percent have eased concerns of a looming recession entering 2020.

The question going forward is how long the bull market can go. In December, Vanguard Group issued a research paper for 2020 that said the coming years will be the dawn of the “new age of uncertainty.”

Citing U.S. trade policy and declining global growth, Vanguard said that “persistently elevated policy uncertainty is holding back economic activity more than ever.” It remains to be seen whether Trump’s recently minted “phase one” trade deal with China will ease that uncertainty.

Even as the market continues to rise, some Americans are skipping it altogether.

Paul Timmins is a small-business owner whose total stock market investment amounts to $900 in an individual retirement account.

“I don’t invest because I don’t understand the stock market,” said the 37-year-old Baltimore-area furniture maker. “It seems like gambling in the wild, wild West. I would rather go to Las Vegas and gamble than put money in the stock market.”

Timmins said his assets are in the wood he uses to build furniture and in four homes he owns and rents out. The homes throw off cash and have appreciated over time.

“I understand real estate,” he said. “I can see them, touch them, fix them.”