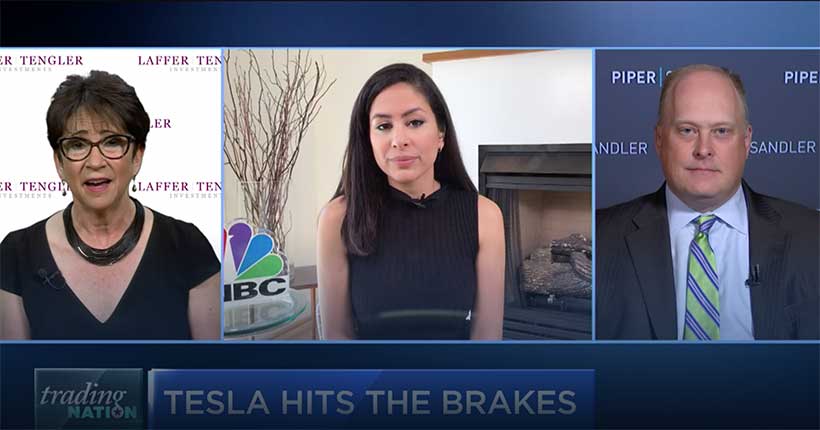 That was the message Friday from two traders as shares of the electric auto maker fell following analyst downgrades from Morgan Stanley and Goldman Sachs.

Morgan Stanley, the more bearish of the two, downgraded Tesla to underweight from equal weight, saying that risks tied to its China business were not priced into the stock. Goldman Sachs analysts were more moderate, downgrading the soaring stock to neutral because of its high valuation.

Tesla shares were down more than 2% in Monday’s premarket after falling on Friday by nearly 4% to $935.28.

“The downgrades … looked logical if you’re looking at valuation and relative valuation, but this stock doesn’t trade on valuation. It trades on sentiment and enthusiasm,” Nancy Tengler, chief investment officer of Laffer Tengler Investments, told CNBC’s “Trading Nation” on Friday.

“If we continue to see a sell-off, this may be an opportunity for investors to dip their toe in for the next three to five years,” she said.

Tengler said her company owned Tesla on its run from roughly $180 to around $320, when it sold as the SEC began investigating CEO Elon Musk’s tweets and members of senior management started to leave the company.

But Tesla has been delivering on its deadlines for the most part, and “while China is a risk, I don’t think that’s why investors own Tesla,” she said.

“It’s priced for dominance in its space and continued strong growth,” Tengler said. “There’s also a lot of interesting, good news on the horizon, so I think this is one where you do want to step back, let the bears take it down some and then come in and make an investment for the next three to five years. China is a wild card, but not just for Tesla, for many of the companies in the technology space.”

Craig Johnson, senior technical research analyst at Piper Sandler, said in the same “Trading Nation” interview that buying shares of Tesla on breakouts has proven to be “quite profitable.”

“If you look back at the track records of prior downgrades from the analysts that downgraded it today, you’ve got to have a little bit of a question mark here as to how much weight you want to put on those downgrades,” he said.

Citing a chart, Johnson said he would likely recommend the stock despite it being up some 124% year to date.

“From my perspective, the momentum is still there, you’re breaking out to new highs, and the stock is a relative outperformer versus the S&P 500,” Johnson said. “If you’re looking to play catch-up, this is a stock that’s doing well and could probably provide that for most portfolio managers.”

“I would leave it fairly open-ended … and say you’re not even anywhere close to done,” he said. “You can see a measured objective that could be several hundred dollars even higher from where you are here just based upon the size of the breakout that you’re seeing.”