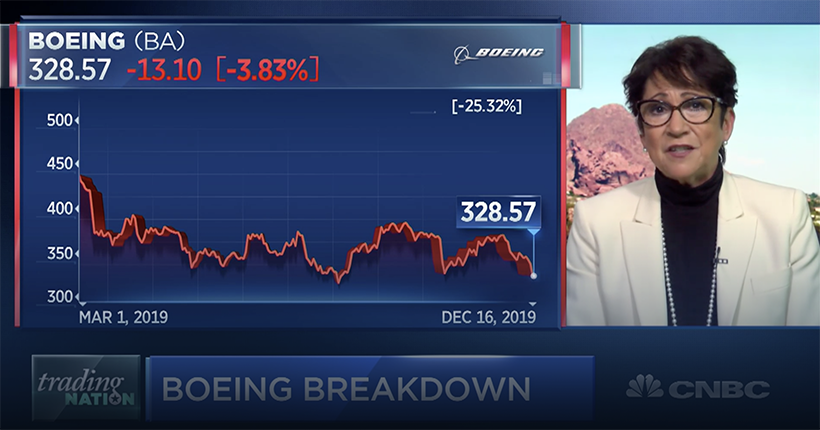 It just got worse for one of the Dow dogs.

DJIA component Boeing fell further Tuesday, to about $322 a share, a day after tumbling on reports that were later confirmed that the company was suspending 737 Max production. The model has been grounded since March following the second of two fatal crashes in five months.

Since a March peak, the stock has fallen more than 25%. It could have been far, far worse for shares, according to Nancy Tengler, chief investment officer at Laffer Tengler Investments.

“The stock should be in the $200 range if you look at all of the catastrophe and mismanagement of message that has gone on in the last year, call it year and a half, yet it still remains at a healthy multiple” Tengler said on CNBC’s “Trading Nation” on Monday before news of the suspension was confirmed by Boeing.

“On a valuation basis, it’s attractive to us as value managers,” Tengler said. “We started adding to holdings in the last month on the expectation that there was not too much more bad news that could happen. I would not encourage your viewers to rush in, but I would say you’re going to be happy you own this stock in three years if you buy it at this level.”

While Tengler said Boeing may see a little more downside, the long-term outlook is higher from here.

Ari Wald, chief market technician at Oppenheimer, says the stock looks washed out, but don’t count on a major catch-up rally to the rest of the market any time soon.

“This isn’t necessarily, from a tactical basis, a stock we’d be betting against, but just when looking broadly and as a generalist, we’re in this outstanding bull market and here’s a stock that just hasn’t participated,” Wald said during the same segment.

Relative to the S&P 500, Boeing broke below multiyear support this year, says Wald. It is also the worst-performing Dow stock over the past three months.

Still, Wald does not see its performance getting any worse, though he doubts it can get much better just yet.

“In absolute terms, I do think this strong bull market keeps it afloat. It’s rare to see downside momentum really accelerate lower in a bull market. The rotation game gets played, and we’re actually quite bullish on capital good stocks, but that relative trend does suggest that there’s a vulnerability for this stock to continue to underperform as it stands,” said Wald.