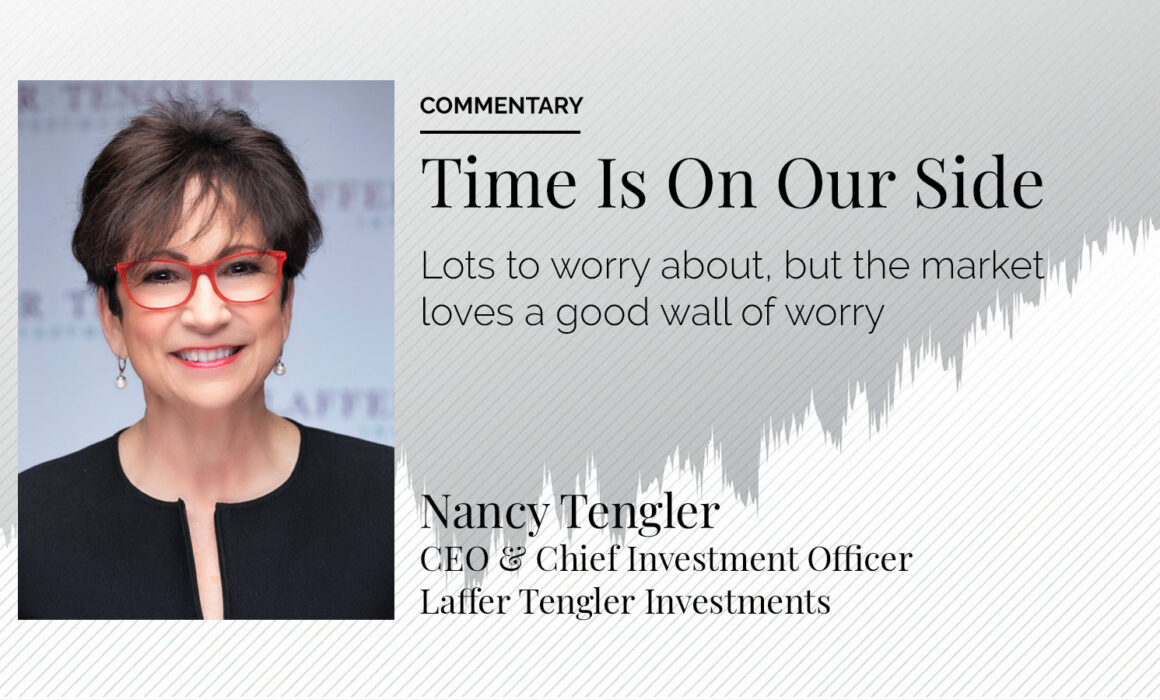 Lots to worry about, but the market loves a good wall of worry

The Rolling Stones were not the first band to record “Time Is On My Side.” It was actually first recorded by trombonist Kai Winding and his orchestra in 1963 (go figure). But the Stones knew a good song when they heard one and recorded it in their own inimitable style (ex the trombone) in 1964.

You’re searching for good times, but just wait and see, you’ll come running back to me.

Mr. Market can be exhilarating and addicting (when on the rise) but, occasionally a royal pain in the posterior. Mick Jagger, it turns out, attended the London School of Economics before abandoning his studies to join the Rolling Stones, proving there is a real and reliable correlation between the economy and rock and roll. OK, I just made that up, but indulge me, please.

(I Can’t Get No) Satisfaction

Investing creates a permanent sense of dissatisfaction. Buys are regretted when the market declines and sells when stocks are roaring. I can live with that. Over time the most important thing is to be invested. (Being invested in the right stocks is even better.)

One of the most important axioms for stock investors is to avoid the temptation to market time, as you can see in the chart below from our friends at Strategas. The best returns (dating back to 1995) are achieved when investors stay in the market. Missing just a few of the best days can cost you dearly.

Now is not the time to fade stocks. Not yet. The average stock has already experienced a bear market decline of -20.0%. Once we get through the fog of the Fed, we expect—as is almost always the case—stocks will rally into the second half of the year as the mid-term elections come into view. (April, by the way, is the worst month in mid-term election years.)

Looks like monetary policy in 2022 was born in a cross-fire hurricane. After insisting for most of 2021 that inflation was transitory, Fed Chair Powell changed his tune in November and retired the word “transitory.” In the meantime, inflation went from a controlled burn to a raging wild-fire. The Fed is so far behind the curve that we can safely say the policy mistake has already occurred.

Thank goodness for the Fed quiet period which began today (April 25th). We won’t have to suffer through the parade of Fed governors and presidents who, after starting the fire, are now running to any free microphone to point out the dangers of runaway inflation and their desire to curb it. I have been told the most dangerous place in Washington D.C. is between Senator Chuck Schumer and a microphone. The Fed members are giving Schumer a run for his money.

The question for investors is whether this tightening phase is analogous to 1980 when Chairman Paul Volker hiked aggressively in 1979 collapsing the economy, subsequently easing aggressively in early 1980 and then hike again in late 1980 spurring a double-dip recession, OR, 1994 when Chairman Alan Greenspan hiked but was able to navigate a soft landing.

The Fed is well behind the curve, obviously. Foreign central banks began tightening over one year ago (over 150 hikes and counting) and are putting the breaks on the global economy. Global rates fell 125 basis points (bps) in 2020 and have risen 100 bps in 2022—that 225 bps swing is meaningful to the economy. The good news for stocks is that the global economic slowdown will likely limit how much the Fed can hike, especially with the mid-terms looming.

Jumpin’ Jack Flash is about having a hard time and getting out, said Jagger. We can hope the same will be true for Powell et al’s monetary policy: It’s all right now, in fact, it’s a gas.

Let’s face it, investors and economists will be studying the events of the last two years for some time. The Fed did indeed play with fire, helped by profligate spending by Congress after the economy was back on track and the reopening behind us. The American Rescue Package which was passed last spring added another $1.5T to an economy flush with cash/demand and limited supply. Think gas on fire.

We are watching jobs very closely—so far we have seen modest layoffs announced in the mortgage sector but the JOLTs number (available jobs) is over 11 million. The manufacturing sector is still expanding but at a decelerating rate. The services sector is also expanding but decelerating. We are watching the components of each for signs of a meaningful slowdown. Finally, we are focused on inflation, the consumer and the price of oil.

It’s important to remember that one of the primary reasons to own stocks is that they are a hedge against inflation. Dividend growers provide an additional hedge and we own many in our portfolios.

Call with questions or worries or comments. We would love to take you through our latest thinking.

General Disclosures
Advisory services offered through Laffer Tengler Investments, Inc. Information and commentary provided by Laffer Tengler Investments, Inc. (“Laffer Tengler”) are opinions and should not be construed as facts. The market commentary is for informational purposes only and should not be deemed as a solicitation to invest or increase investments in Laffer Tengler products or the products of Laffer Tengler affiliates. The information contained herein constitutes general information and is not directed to, designed for, or individually tailored to, any particular investor or potential investor. This report is not intended to be a client-specific suitability analysis or recommendation, an offer to participate in any investment, or a recommendation to buy, hold or sell securities. Do not use this report as the sole basis for investment decisions. Do not select an asset class or investment product based on performance alone. Consider all relevant information, including your existing portfolio, investment objectives, risk tolerance, liquidity needs and investment time horizon. There can be no guarantee that any of the described objectives can be achieved. Laffer Tengler Investments, Inc. does not undertake to advise you of any change in its opinions or the information contained in this report. Past performance is not a guarantee of future results. Information provided from third parties was obtained from sources believed to be reliable, but no reservation or warranty is made as to its accuracy or completeness. Different types of investments involve varying degrees of risk, and there can be no assurance that any specific investment will be profitable. The price of any investment may rise or fall due to changes in the broad markets or changes in a company’s financial condition and may do so unpredictably.

Laffer Tengler Investments, Inc. does not make any representation that any strategy will or is likely to achieve returns similar to those shown in any performance results that may be illustrated in this presentation. There is no assurance that a portfolio will achieve its investment objective.

Definitions and Indices
The S&P 500 Index is a stock market index based on the market capitalization of 500 leading companies publicly traded in the U.S. stock market, as determined by Standard & Poor’s. Unless otherwise noted, index returns reflect the reinvestment of income dividends and capital gains, if any, but do Not reflect fees, brokerage commissions, or other expenses of investing. Investors cannot make direct investments into any index. Laffer Tengler Investments, Inc. is a Registered Investment Advisor. Registration with the SEC or a state securities authority does not imply a certain level of skill or training. Laffer Tengler’s advisory fee and risks are fully detailed in Part 2 of its Form ADV, available on request.