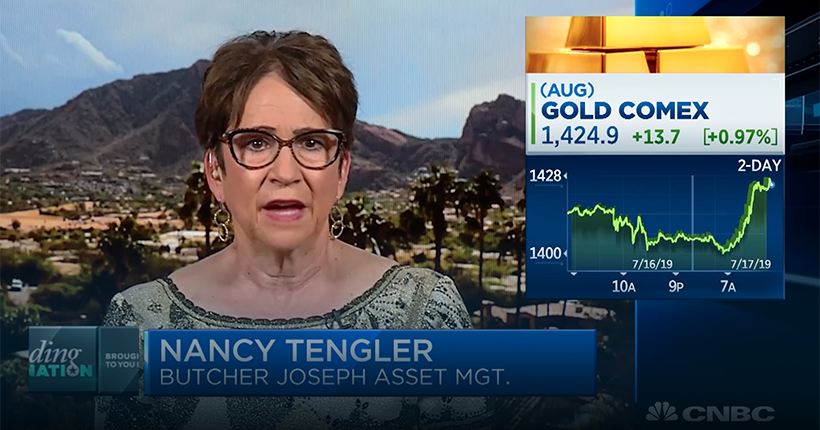 One commodity has proven a golden opportunity in the past week. The price of gold has moved 1% higher against a slight drop for the S&P 500 as investors favored a safety hedge following the stock market’s record run.

Gold prices moved even higher Wednesday after billionaire hedge fund manager Ray Dalio picked the commodity as one of his top investments. In a LinkedIn post, he said the asset could act as a defensive play as global markets undergo a “paradigm shift.”

Nancy Tengler, chief investment strategist at Butcher Joseph Asset Management, is loathe to disagree with Dalio, but she isn’t buying that argument in favor of gold.

“I do see it more as a trading opportunity, so a short-term place to place funds but not a paradigm shift as [Dalio] tends to describe as a 10-year trend,” Tengler said Wednesday on CNBC’s “Trading Nation. ”

“We would advise clients to put some money in at current levels as a protection against slowing global growth, potentially a Fed that may not be as easy as some expect, and some market volatility, but I don’t see this as a long-term trade at this level.”

Gold is the best-performing commodity this year. Its gains are nearly double those of second-best performer platinum.

“We saw a major base breakout in gold in June and we saw gaps up in the likes of GLD [gold ETF] and really the gold prices have managed to hold that gap which I see as a positive development, ” Stockton said on the segment. “The consolidation phase now appears to be resolved to the upside, so that really frees up gold to see some upside follow through.”

Gold has broken out in the past three months, rallying 12% and tripling the gains on the S&P 500 over that stretch. It now trades at levels not seen since April 2013. The GLD ETF, which mirrors gold prices, is also at mid-2013 highs.

“The next resistance for gold prices is around $1,590. That’s based on the technician’s favorite level — the Fibonacci retracement levels — and I think that upside is very realistic for gold based on that base breakout that we’ve seen,” said Stockton.

Gold would need to surge 11% before hitting $1,590. A Fibonacci retracement tracks support and resistance levels based upon how much an asset has pulled back from highs or rallied off lows. That $1,590 level marks a 61.8% retracement from its September 2011 high to its December 2015 low.

READ THE ENTIRE ARTICLE ON CNBC