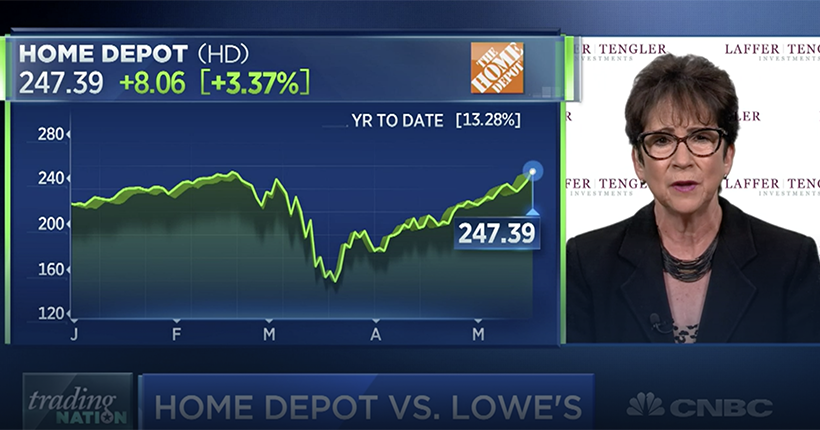 Home Depot shares are under pressure Tuesday after the company posted a drop in earnings tied to coronavirus-related expenses.

But, even with that decline, Home Depot is still leading against major competitor Lowe’s. Home Depot stock remains up 9% for the year, while Lowe’s has fallen 3%.

That trend of outperformance should continue, according to Nancy Tengler, chief investment officer at Laffer Tengler Investments.

“We own both but we own a lot more of Home Depot and the reason is twofold. First of all, they’re best in class, they have the best locations, candidly the best management team, and they’ve been growing the dividend in the 20% range every year for the last five years,” Tengler said Monday on CNBC’s “Trading Nation.” “The free cash flow is healthy, well above dividend, and the online sales have been compelling at 20% or so.”

While Home Depot has outperformed Lowe’s this year, it has had a slightly weaker run this quarter – it has risen 29% compared with a 37% gain for Lowe’s. Ari Wald, head of technical analysis at Oppenheimer, said it should regain its lead.

“We do prefer Home Depot stock. It not only has a stronger long-term trend, but we see it as the more tactical idea here,” Wald said in the same segment. “If you plot a ratio of the two stocks against each other, Home Depot has actually underperformed since mid-March, and is coming into support at its 200-day moving average, suggesting we’re approaching a likely turning point in the ratio.”

The stock is also back to all-time highs, said Wald, and should continue to move higher.

Home Depot is “currently trying to break out above its February peak of $247 so I think that’s very telling when you have a stock already getting close to new cycle highs with the rest of the market so well below those peaks. That’s really a great display of the relative strength in that stock,” said Wald.

Home Depot hit an all-time high on Monday, surpassing its February peak. It is now 3% below that record.