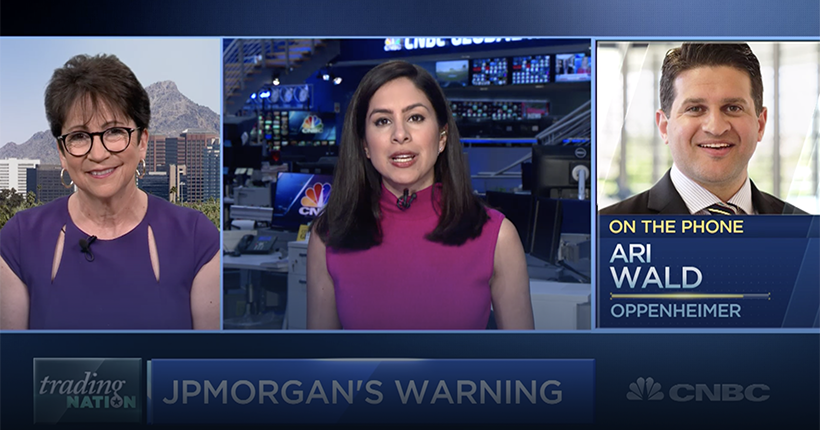 JPMorgan kicks off the first-quarter earnings season next Tuesday.

Ahead of the release, CEO Jamie Dimon cautioned in his annual shareholder letter that 2020 earnings could come in be “meaningfully” lower due to economic weakness stemming from the coronavirus outbreak.

Ari Wald, head of technical analysis at Oppenheimer, says trading in bank stocks could remain “jerky,” but he thinks JPMorgan is one of the top picks of the group. “We’re specifically recommending JPMorgan over Wells Fargo from an industry-neutral viewpoint. The key here is that JPMorgan has been leading versus its peers and Wells has been lagging. Stick with the relative strength, stick with the leadership and JPMorgan,” Wald said on CNBC’s “Trading Nation” on Monday.

JPMorgan stock has declined 36% this year, though the KBE bank ETF has dropped an even sharper 44%. Wells Fargo has performed slightly worse, falling 46%.

Dimon also said in Monday’s letter that the company might consider pulling back on its dividend if the economic fallout shakes out even worse than anticipated. Nancy Tengler, chief investment officer at Laffer Tengler Investments, doesn’t expect the worst.

“I don’t like to be on the other side of very smart people. [Former Federal Reserve chair] Janet Yellen was calling for that again [Monday],” Tengler said during the same segment. “I don’t think they should. The banks’ balance sheets are in much stronger shape than they were going into the Great Recession. JPMorgan is at an A-minus with stable credit outlook and a free cash flow yield of 4%.

“I thought it was prudent of [Dimon] to talk about the potential for reserving the dividend, as something they would be willing to sacrifice if things got significantly worse, but he also admitted it really wouldn’t contribute meaningfully to the equity capital base,” Tengler said. “You want to own the leaders, because a lot of this is uncertain, and the best managed companies — and that’s clearly JPMorgan.”