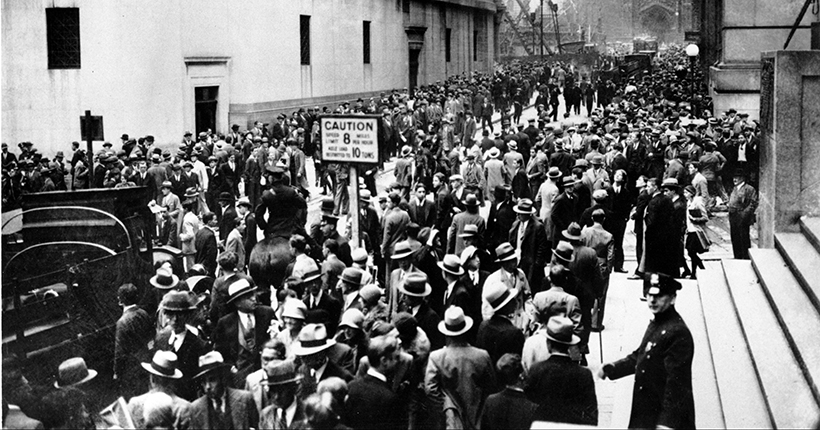 Oct. 29 marked the 90th anniversary of Black Tuesday, which preceded the Great Depression. Periodically the odd pundit weighs in on how today’s market is analogous to 1929 and, hey, by the way, buy some gold. Before the gold bugs take me to task, I am not anti-gold; I just don’t like the fearmongering. As the great Peter Lynch once said, “Far more money has been lost by investors preparing for corrections, or trying to anticipate corrections, than has been lost in the corrections themselves.”

I began my career as a professional investor in the mid-1980s and cut my teeth on Black Monday: Oct. 19, 1987. The Dow Jones Industrial Average dropped 22.61% in one day. The mood was bleak – there were rumblings that we were in for an extended crash.

However, if investors sold in a panic, they would have missed two of the top 20 largest one-day gains in the Dow since 1950. On the very next day, the index rose by 5.9%, and the following day, Oct. 21, the market rose another 10.2%. And then we must remember how the market performed for the next decade-plus. … It exploded to the upside.

Still, it took until 1954 for the 1929 peak to be regained. That’s some buy-and-hold strategy. That is a statistic the pundits trot out when drawing parallels back to 1929; 25 years to recoup losses extend beyond the average investor’s time horizon. And it is scary to contemplate.

One stark difference between 1929 and 2019, though, is the market has democratized (if you will) thanks to the advent of 401(k) plans and IRAs. No longer do only the very rich invest in stocks; teachers and bus drivers, admins and salespeople invest via 401(k) plans, and that is good for markets. There is less speculation and outsized leverage and more long-term investing. Warren Buffett advised: “If you aren’t willing to own a stock for 10 years, don’t even think about owning it for 10 minutes.” Long-term investors stabilize market volatility; they provide an anchor, and based on more than 140 years of research (Jeremy Siegel’s Stocks for the Long Run) enjoy high-single-digit returns over rolling 20-year periods.

Bear markets are not banished from our future, but it is unlikely we will experience a 25-year recovery period from the next decline like the one after Black Monday.

No one knows the future, and even the experts who make it their business to predict market moves have a dismal history. A 2013 study by CXO Advisory Group titled “Guru Grades” focused on one primary metric: accuracy. What did they find? From 1998 to 2012, the average accuracy of the 68 experts measured was 47.4%. Worse odds than a coin toss.

A stock market crash like the one that followed Black Tuesday in 1929 or even the one-day bear market on Black Tuesday of 1987 are generational events and may or may not be repeated. It is hard to say. But we do know one thing for sure: Market corrections do and actually must occur to prune back excesses. This may, in fact, be an opportunity to buy great companies on sale, especially via your 401(k), where you dollar average in every two weeks.