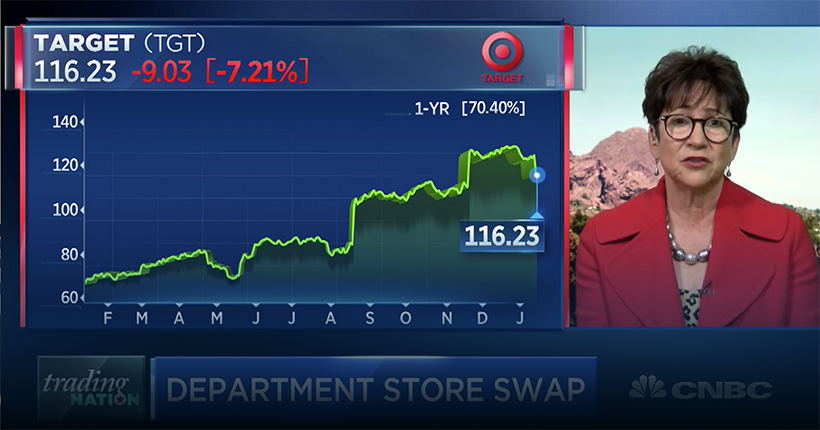 Investors might want to take their shot at Target.

One of 2019′s best-performing retail stocks with an impressive 94% annual gain, Target is off to a rocky start in 2020, plunging over 6.5% on Wednesday after reporting weaker-than-expected holiday sales. That brings Target’s total year-to-date loss to roughly 9%.

“As a value manager, I really want to like Macy’s here, … but it still feels like a value trap to me,” she told CNBC’s “Trading Nation” on Wednesday. “The model hasn’t changed. The stores are tired. I tried to buy some stuff online over the holidays; it was not a fun experience.”

On the other hand, Target “is giving us, fundamental investors, an opportunity because it’s pulled back,” Tengler said. “The e-commerce sales were particularly disappointing, but it’s nothing they can’t fix. I think if it sells off further, I’m actually interested in stepping in at these levels.”

With Macy’s shares looking overbought based on their relative strength index, and brushing up against their 200-day moving average, “the stock has probably run its course, at least over the near term, and [is] getting ripe for a pullback,” Maley said in the same “Trading Nation” interview.

“On the other hand, when we look at Target, that stock had gotten overbought earlier in November, rolled over and is now very, very oversold,” which, to technicians, can signal a buying opportunity, Maley said.

In fact, Target’s RSI is approaching especially oversold levels from which it has rebounded quite sharply in the last two years, Maley said, pointing to the chart.

Better yet, Target is also “testing its 100-day moving average. That has provided very good support for the stock,” Maley said. “Now, … the last two times it got to that level, it did dip below it, so, I do agree: It could go a little bit lower from here over a very short-term basis. But that should provide a great opportunity to buy the stock.”

“When it comes to Target, if it continues and it starts to show that maybe the consumer is starting to pull on their horns, then we’ve got some real problems,” he said. “But until we see more evidence of that on a lot of different areas, I think things look pretty good for Target.”