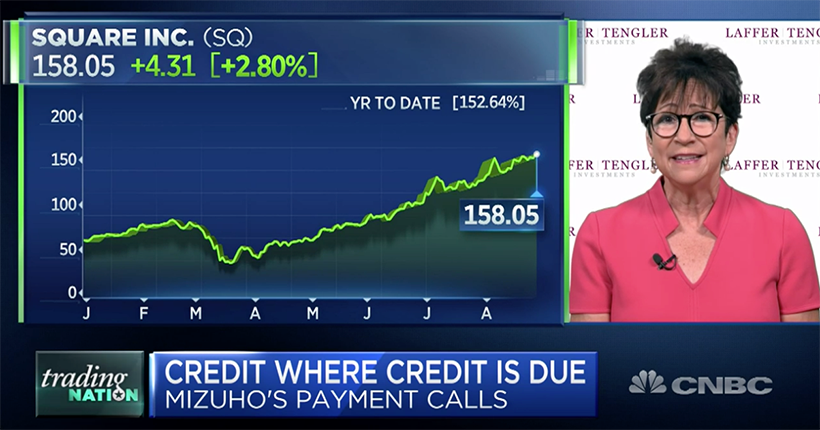 Fintech is on fire.

Mizuho analysts initiated coverage of nine payment stocks on Thursday, saying in a note they were “most enthused” about PayPal, Visa, Square, Fiserv and WEX based on their analysis of the companies’ market share gains and other key metrics.

One particular corner of the space is gaining steam faster than others. Digital payment darlings Square and PayPal are up 149% and 89% year to date while credit card giants Mastercard and Visa are up 19% and 12%, respectively. Fidelity National Information Services is up about 9%. Global Payments, Fleetcor, Fiserv and WEX are all down for the year.

After selling Visa in March, her firm turned its attention to Square, the $70 billion CashApp parent. While Tengler admitted she was still looking for an entry point in the soaring name, she applauded Mizuho’s note for being “absolutely correct on fintech” with cash transactions and ATM withdrawals on the decline.

Better yet, “the use of touchless payment has gone up dramatically,” she said. “So, we like this story. We like the fact that they acquired approval for a bank, a de novo bank, and we think the model is the right one.”

The challenge is finding the right entry point in a stock hitting all-time highs, Tengler said.

“If you aren’t in, it’s very difficult to step in here. However, we’ve seen it with many of these names that they continue to drive earnings growth, which is scarce in the market,” she said.

“In the case of Square, the revenues are growing in the mid-40% range, the balance sheet is sound and solid with more cash than debt and they’ve started to put earnings on the board. So, we look at relative price-to-sales ratio, and on that metric, it actually still is attractive. That’s how we purchased Tesla,” Tengler said. “So, I think you are ginger when you get in. You add some, you add a little more and you dollar-cost average. We’ll get a pullback at some point and that would be an opportunity, I believe.”

Delano Saporu, founder and financial advisor at New Street Advisors Group, is a fan of Square and its 2020 runner-up.

“I actually like PayPal and Square,” he said in the same “Trading Nation” interview. “The continued rise in digital payments is something that we’re going to see a lot more of, especially in the new normal where we’re trying to stay away from each other as much as possible.”

PayPal’s recent agreement with CVS to add touchless QR code technology to the drugstore chain’s locations and its deal with Walmart Canada are bullish for the Venmo parent’s stock, Saporu said.

“Square is also doing that on the small business front. They have a strong foothold there, so, that story continues,” he said. “When you’re thinking about Venmo for PayPal and then CashApp for Square, they built a strong ecosystem, especially with young users who are really looking at that digital payments space, who are really entrenched in that.”

“I think you’re looking at further players that are going to really tie that in, that larger ecosystem, and gobble up more users,” he added.