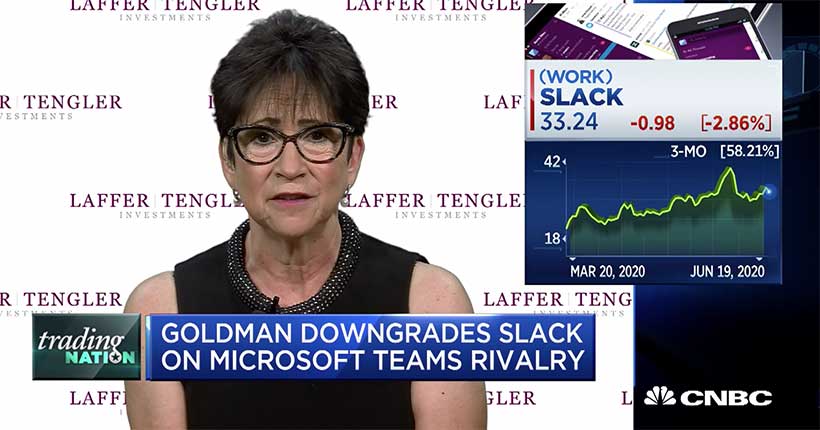 Investors like the messengers, not shooting them. It’s just a question of which one they like more.

The rivalry between Slack and Microsoft Teams is heating up, with Goldman Sachs downgrading Slack’s stock on Friday to sell because of what it expects to be an “enduring battle” for customers between the two messaging apps.

“While we continue to view Slack as a best-in-class team messaging offering that is favored by the technical community, we expect MSFT Teams to continue to try and leverage its packaging within Ofﬁce 365 to drive increased adoption, thus creating the potential for a more competitive environment,” analysts wrote.

“Slack has 25% of their revenue exposure in the small business space,” the likeliest group to forgo payments, Tengler said.

“Yes, the technology is better than Microsoft, but [Microsoft’s] 258 million [user] installed base and the fact that they’re focused on growing this business has shown up in the recent numbers,” she said. “In March and April, their growth was tenfold that of Slack’s. Compare that to 2018, when Slack was at fourfold growth faster than Microsoft. We own Microsoft. We like it here. It’s got a lot of levers to pull. So, I’d make that swap as an investor.”

Craig Johnson, senior technical research analyst at Piper Sandler, took the other side of the trade.

“I like it,” he said of Slack in the same “Trading Nation” interview, pointing to its technical chart.

“The chart itself is making a big rounding bottom,” Johnson said. “Yeah, it’s pulled back here a little bit, but from our perspective, this is a pullback you want to buy.”

Johnson added that Slack’s 114% rally from its March lows “doesn’t concern” him when evaluating the stock.

“It’s a long-term growth story and they are winning some large customers,” he said. “Verizon and other companies like that are buying this service. So, it’s a stock, for us, that we should be buying.”