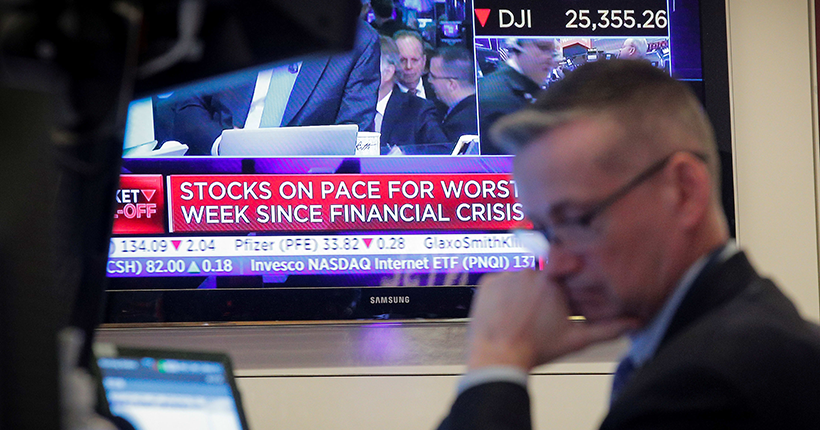 U.S. stocks dropped Friday but held on to big weekly gains as the House sent an economic rescue package to President Trump and the U.S. overtook China as the country with the most cases of coronavirus.

Investors have been on a roller-coaster ride as attempts to curb the coronavirus pandemic constrain economic activity. Despite Friday’s declines, the Dow is on pace for a weekly gain of more than 14%. That follows two weeks of double-digit declines, one of which was the worst since October 2008.

“Underlying all this is how do we get this virus under control,” said Neil Hennessy, chief investment officer of Hennessy Funds. “Once we have it under control or it peaks, subsides, whatever, then the market will be back on its legs.”

Investors waiting for government spending measures to help cushion the economic damage of the coronavirus pandemic watched as the House passed a $2 trillion stimulus package by a voice vote Friday afternoon. One Republican lawmaker had tried to force a recorded vote, which would have delayed the passage.

The bill, which passed the Senate late Wednesday, is the largest economic-relief package in history and would extend aid to many Americans through direct payments and expanded unemployment insurance. A record 3.28 million U.S. workers applied for unemployment benefits last week, nearly five times the previous record high.

The U.S. overtook China this week as the country with the most coronavirus cases with 85,991 confirmed infections, while fatalities topped 1,296. Hospitals in the New York metro area and Seattle have been overwhelmed despite stringent measures to curtail the contagion.

Adding to concerns about how long the pandemic may damp economic activity, China said Thursday it would close its borders to nearly all foreigners and drastically slash international flights in a bid to curb the reintroduction of the virus from abroad.

“We want to see the peak of the virus curve, because the clock starts then for when the lockdown stops,” said James Athey, senior investment manager at Aberdeen Standard Investments.

The spread of the virus—and the economic fallout from measures put in place to halt the outbreak—has fueled debate on whether the U.S. needs to continue enforcing a strict lockdown that is eroding business activity and output. The Trump administration is planning to issue guidelines aimed at helping state and local authorities decide whether to tighten or relax measures designed to help slow infections.

Investors and business leaders are concerned that emergency measures by the Federal Reserve and U.S. lawmakers, including the much-anticipated stimulus package, may not prevent a sharp U.S. recession that could have global consequences.

“What we’re trying to do is put the economy on ice and sow the seeds of a strong rebound as soon as the crisis is over, recouping as much economic ground as possible,” said Richard McGuire, head of rates strategy at Rabobank. “It’s a volatile environment where we will, within that context, see repeated bold policy responses, but they are pushing on an open door.”

Friday’s stock-market declines were broad, with all 11 sectors of the S&P 500 lower. Shares in cruise companies dropped after a last-minute legislative change Thursday excluded them from the U.S. stimulus package. Carnival shares sank 18%, and Royal Caribbean Cruises fell 17%.

The Cboe Volatility Index, a closely watched measure of turbulence in U.S. stocks, was on pace to finish the week lower after rising for five consecutive weeks, though it remained elevated. Many investors expect the recent volatility in the markets to persist.

“I think this will continue for some time,” said Nancy Tengler, chief investment officer at Laffer Tengler Investments. “The news is going to be spotty and investors have been scrambling.”

Oil prices declined after the U.S. Department of Energy suspended the purchase of 30 million barrels of crude oil it was going to add to its Strategic Petroleum Reserve. The meeting of G-20 leaders also disappointed some traders after it failed to produce any statement that related to oil or the price war raging between Saudi Arabia and Russia. U.S. crude declined 6% to $21.25 a barrel.

Given that cases are still surging in the U.S. and Europe, and the collateral damage of coronavirus lockdowns has yet to be fully exposed, CMC Markets analyst Margaret Yang called this week’s rebound in U.S. stocks “a false rally in the middle of a bear market.”

Investors continued to seek out U.S. government bonds as a safe place to park their money. The yield on the 10-year U.S. Treasury note edged down to 0.736%, from 0.806% Thursday.

In Asia, most major markets drifted higher by the close of trading. Japan’s Nikkei 225 was the best performer, rising 3.9% to end what was the gauge’s best week in its 70-year history.