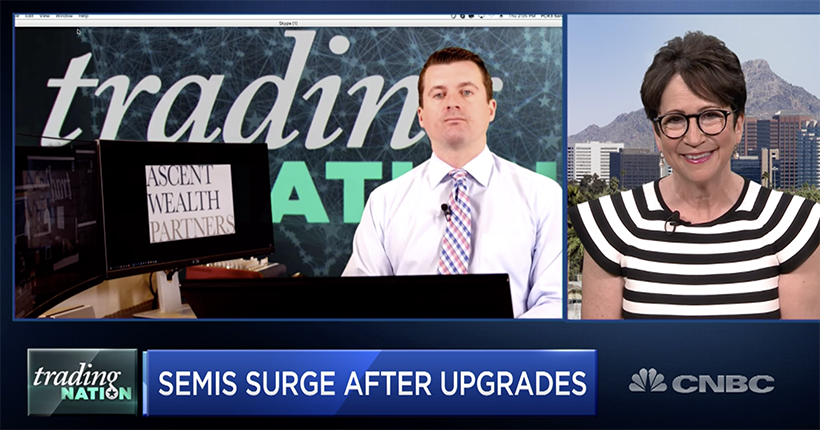 A safe haven in the semis.

That’s what traders sought on Thursday as the VanEck Vectors Semiconductor ETF (SMH) rose more than 6% on the back of some analyst upgrades in the space and a historically strong day for the overall stock market.

Micron and Intel were the targets of some Wall Street praise early Thursday. Analysts at Bank of America upgraded Micron to buy from underperform, while Bernstein upgraded Intel to market perform from underperform, both citing a possible near-term demand lift.

Her top picks were Intel, Broadcom and Texas Instruments, with Intel being her favorite of the three for what she called its “fabulous” balance sheet, ample free cash flow and healthy dividend. She added that while she “would love to be able to buy Micron,” it was still too expensive to meet her buying criteria.

“We actually raised our guidelines in this stock last week, and so, I think this is a safe port in a storm for investors,” Tengler said of Intel. “China’s open for business. I think that portends well for the U.S. So, I think this is a place where you can put some money and just have the confidence that you’re going to do well in the near term and very well in the long term.”

Todd Gordon, managing director at Ascent Wealth Partners, agreed that Intel stood out from the pack.

“We’re seeing a lot of relative strength here in the semis going back all the way to the credit crisis lows,” he said, pointing to a chart of the SMH.

“We did not break support right around $100 in that SMH ETF, plus you have the 200-week moving average, the average closing price of the last 200 trading weeks. It held as support quite well,” he said.Intel has also shown “nice uptrend support,” even during the sharp recent downturn in the broader market, Gordon said.

“That uptrend support, that purple line, again, is the 200-week moving average. For some reason, this is offering a lot of support here,” he said. “We like it.”

Tengler added that if technology companies start to cut or suspend their dividends to shield themselves from the economic blow of the coronavirus outbreak, Intel’s solid cash position could give the chipmaker a leg up.

“I’m confident they have lots of levers to pull. They can cut back a little bit on capex,” she said, referring to capital expenditures. “But this demand is not demand pull like we’ve seen at places like Walmart, Kroger or Costco. This is incremental demand with employees working from home, companies ordering new equipment. So, I’m pretty optimistic that they’ll be able to pay their dividends.”