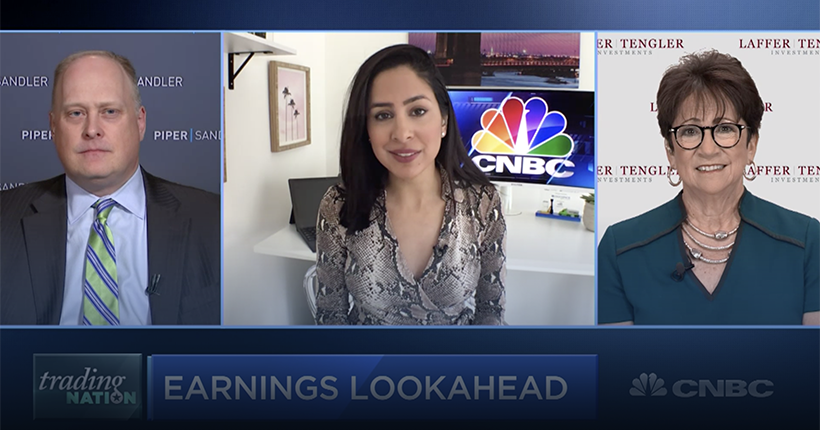 Ninety-six S&P 500 companies will report their quarterly results this week, with giants including Coca-Cola, Netflix and IBM set to share how the coronavirus pandemic impacted their businesses in the first three months of 2020.

But not all companies will necessarily be rocked by the uncertainty, traders told CNBC’s “Trading Nation.”

“We are going to be watching very closely,” Nancy Tengler, chief investment officer at Laffer Tengler Investments, said in the Friday interview.

“We just initiated a position in Chipotle,” which reports on Tuesday, Tengler said. “We’d love to buy more, but the stock’s up 50% from where we made our initial purchase. So, we’ll be listening very closely to see what the company’s guidance is for delivering food coming out of the other side of this. Is there going to be more takeout? When will the drive-thrus be ready? But we love the story. We love the stock. It’s a loyal, loyal customer base, with free cash flow that’s up over 60% year over year. So, if we get a little pullback, we’ll continue to add to our holdings in here.”

Chipotle shares were down more than 2% in Monday’s premarket to $800 per share as stock indexes pointed to a lower open.

If earnings surprise to the upside, Tengler said she would also consider building a position in IBM.

“I think we’re going to get more opportunities to dip in, and one of the stocks we’re looking at initiating is IBM while we hold our nose,” she said. “I think that might be an opportunity if we see some companies string together a couple quarters of revenue growth.”

“There’s two names that kind of stand out to me from a trading perspective in here, and the first I would point out would be Netflix,” he said, pointing to its chart.

“Here is a stock that’s broken out of an ascending triangle [pattern]. It’s also above its 200-day moving average, which I would note is rising at this point in time,” Johnson said.

Given those bullish moves, Johnson said he would be a buyer of the stock on “any sort of pullbacks towards 390.” Netflix shares were trading at $432.50 in Monday’s premarket, up 2.2%

“Regardless of how the print comes, clearly, this is a stock that’s going to benefit from the coronavirus and people working at home and staying at home,” Johnson said. He said he could “see this stock move up to around 525 or 550″ in the next 12 to 18 months.

Johnson’s second pick was in line with Tengler’s first.

“Nancy’s right. There’s a lot of loyal customers to Chipotle,” he said, pointing to the stock’s chart.

With that setup in mind, Johnson said he could see the stock moving toward Piper Sandler analyst Nicole Miller Regan’s $850 price target, or even back to its old February highs above $930.

“The technicals and the fundamentals, stars and moons are aligned on that one, and we would definitely be a buyer of that heading into the print, too,” he said.

It’s tougher to gauge where the broad market heads next, however.

To Tengler, the recent rally off the March lows “seems largely overdone.” She said Netflix and Chipotle stocks are trading at notably elevated price-to-earnings multiples.

“I think we have to kind of take a breath because we don’t know if this is ‘V’ shaped. I hope it is,” Tengler said. “We saw J&J report and raise their dividend. That was all good news. But I am concerned that we … snapped back a little too quickly.”

Johnson said that while the March selling got overdone, this rally seems like it could have legs.

“Now that we’ve recaptured 50% of the decline post those February highs to the March lows — and I do believe the March lows are the lows here — I suspect that we’re going to see a little bit of a move higher on the S&P back toward the 200-day moving average, which is right around 3,000,” Johnson said.

“Then, you’ve got … a square-root-sign kind of recovery, meaning you went down, you’ve come back up, and you’re going to have a period where you’re going to mark time and go sideways for perhaps the next several quarters in here,” Johnson said. “Ultimately, as you get through the election and depending on how the election plays out, I suspect you’re going to see the market move higher, Santa Claus probably arrives toward year end, and I would think that our 3,600 year-end objective is probably going to be a number that’s still a good number at this point.”