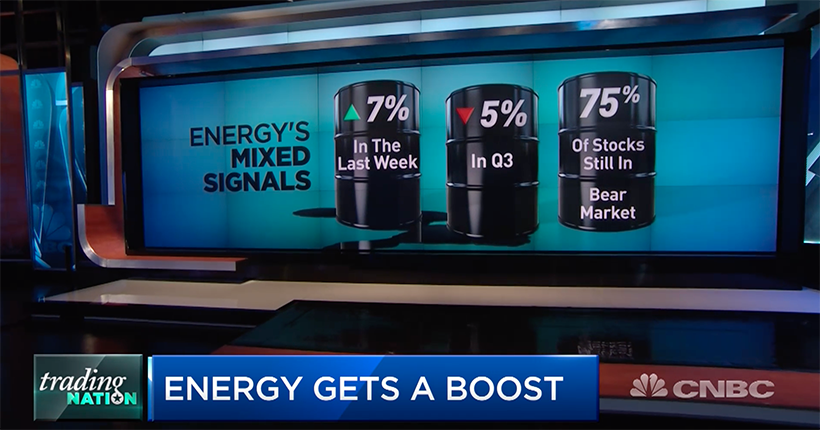 Energy stocks are on the move. The group was higher at the end of Tuesday’s trading session, holding a 1% gain despite the drop in oil prices that followed President Donald Trump’s announcement that he had fired his national security advisor, John Bolton.

But having bounced from a “very deep oversold condition,” it’s too soon to say “this is a sea change for the sector,” warns Ari Wald, head of technical analysis at Oppenheimer.

“Energy’s relative trend … has been in this steady progression of lower highs and lower lows over a number of years, but I think there is a little bit of juice left here just simply based on our view of the market,” Wald said Tuesday on CNBC’s “Trading Nation.”

But the latest uptick in the sector’s most downtrodden names is “very bullish” for energy investors, and should lead to higher prices for the overall space, he said.

Still, “I just want to be selective within energy,” he said. “The midstreams really screen positively for us for exposure to this sector.”

Midstream companies typically preside over the processing, storing and transportation of oil and gas, and out of that subgroup, Wald’s favorite is Oklahoma-based Oneok.

The stock is “breaking through five-year resistance dating back to 2014,” Wald said, adding that it’s “tough to find another energy stock that has that type of profile. Here’s a leading energy company that is participating as the laggards bounce as well. That’s how we want to play. That’s a top idea for exposure, Oneok.”

“There was a brief run-up in the stocks when we were overweight the group in 2016 when oil got down in the mid-$20s, but then it fizzled and the relative yields just kind of plopped along and the relative prices dramatically underperformed,” she said in the same “Trading Nation” interview.

And while Wald’s call wasn’t specifically unappealing to Tengler, she preferred a less risky approach.

“I’d like to have Ari’s courage, but we’re playing it with the large, integrated oils and we’re at about a market weight now,” she said Tuesday.