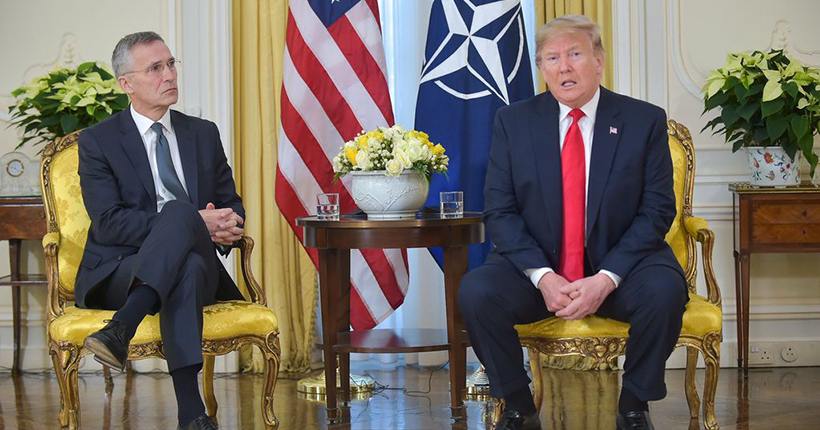 President Trump on Tuesday made his most pessimistic comments in weeks regarding a trade deal with China, sending chills through Wall Street just one day after ratcheting up tensions with Brazil, Argentina, and France.

Speaking on the first day of NATO’s 70th anniversary summit in London, Trump said he was open to waiting until after the 2020 elections to reach a trade deal with China, a sharp departure from his comments in October when he said a “phase one” accord was nearly complete.

“In some ways, I like the idea of waiting until after the election for the China deal, but they want to make a deal now and we will see whether or not the deal is going to be right,” Trump told reporters.

The Dow Jones industrial average tumbled 400 points after his comments, or 1.4 percent, and the Standard & Poor’s 500 fell roughly 1 percent. The downturn followed a rocky Monday on Wall Street, spurred in part by Trump’s sudden announcement he would reimpose tariffs on steel and aluminum from Brazil and Argentina.

“We were reminded [Monday] that the manufacturing sector has been weak, and a good part of that weakness is attributable to uncertainty about Trump’s trade war,” said Ed Yardeni, president of Yardeni Research. “And today we’re reminded that it’s not over until it’s over.”

Still, analysts note, Trump treats the markets as a personal poll. He routinely touts the strength of the U.S. economy as a signature achievement, one he promotes in the Oval Office as well as on the campaign trail.

“The market is important to him, and he has said many times it is what he wants to be judged on,” said Ivan Feinseth, chief investment officer of Tigress Financial Partners. “He can only go so far, and then he softens up and the market rallies.”

Speaking in London, Trump called Tuesday’s Wall Street losses “peanuts” and said he doesn’t “watch the stock market” as it goes up or down.

“I watch jobs. Jobs are what I watch,” he said. “We have picked up record numbers so that’s OK. That’s the way I feel.”

“I would not be surprised if we rally in subsequent days because [Trump] knows one thing, and that is that he wants to get elected,” Tengler said.

December is historically the best-performing month for the S&P 500. Money managers tend to take cash off the sidelines and invest in stocks so that portfolio clients can see that their money is at work and ready for the next year. Year-end bonuses and optimism from the holidays also can nudge the markets higher. Some managers sell their money-losers for tax purposes and reinvest that in higher-performing stocks.

With a relatively strong economy and the market up 25 percent this year, Trump may think he is in the best position to confront China on trade issues.

For much of the 21-month trade war with Beijing, Trump has contradicted himself on when a deal might be reached or how willing he is to come to the table. The next deadline is Dec. 15, when a new set of U.S. levies would hit roughly $160 billion in Chinese goods. People familiar with the talks told The Washington Post last month that those tariffs would disappear if a deal was brokered beforehand.

The deadline is of particular concern for tech investors wondering whether Apple will receive an exemption from the next wave of levies, Daniel Ives of Wedbush Securities wrote in an analyst note. Trump’s trade policies with China have jostled Apple’s stock price. The lack of a trade agreement leaves Apple products, including the iPhone, vulnerable to other restrictions. (In September, the White House exempted certain Chinese-made components used in the Mac Pro from the tariffs.)

“While this is all a game of high stakes poker between the U.S. and China as they head to a likely Phase 1 agreement on the tariff talks, Apple continues to be in the crossfire given its flagship iPhone manufacturing footprint in China,” Ives wrote.

Trump announced the “phase one” deal in October, marking the first tangible achievement in the long-running clash that’s affected hundreds of billions of dollars in goods and that analysts projected would stunt global trade and cost American jobs. Trump said Beijing had agreed to roughly double its purchase of U.S. farm goods to more than $40 billion a year, open its financial services market, tighten its intellectual property protections and refrain from using currency as a trade weapon.

The prospect of an accord rallied markets: November was a blockbuster month, as strong earnings and trade hopes yielded 10 record-breaking closes for U.S. indexes.

But Chinese officials have never confirmed an agreement was imminent and have said the talks remain ongoing. Trump’s comments Tuesday suggest a deal could be further off than he has recently claimed.

On Tuesday, Trump also derided comments made by French President Emmanuel Macron — who blamed the “brain death” of NATO on a lack of American support — as “very very nasty” and “very disrespectful.”

Just the day before, Trump threatened tariffs of as much as 100 percent on $2.4 billion in French wine, cheese, yogurt and other products. The White House’s top trade negotiator, Robert E. Lighthizer, called the levies a response to a French digital services tax the administration views as discriminatory against American Internet companies.