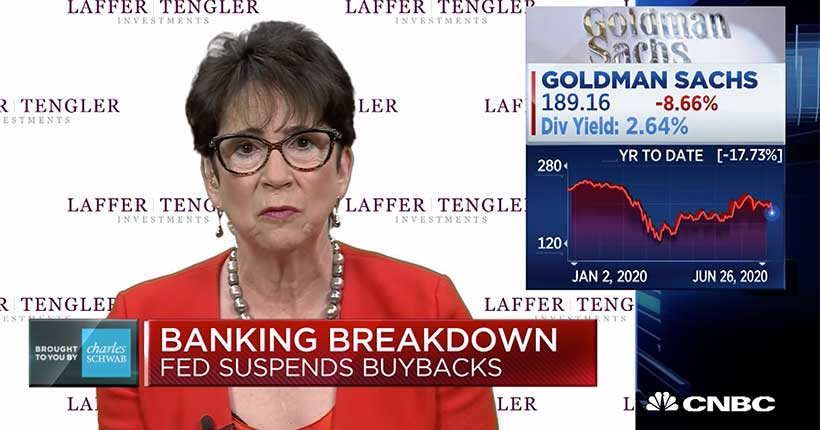 Banks’ dividends could be at risk. Banking stocks tumbled Friday after the Federal Reserve highlighted potential vulnerabilities in the sector. The central bank suspended buybacks and capped dividends on financial institutions through the third quarter after its recent stress tests. Banks are expected to announce any changes to their dividends after the bell Monday.

Nancy Tengler, chief investment officer at Laffer Tengler Investments, said Goldman Sachs could be one of the major financial companies best equipped to weather the coronavirus pandemic and economic slowdown.

“This is a company that gets 96% of their revenue from noninterest income, so that’s a benefit in a flat to low interest rate environment,” Tengler said Friday on CNBC’s “Trading Nation.” “Long term we like this story better than say a Wells Fargo that gets 20% of revenue from noninterest income, and is exposed to many of the spaces — autos and mortgages, autos in particular – that we don’t want to be part of.”

Goldman Sachs has fallen 18% this year, while Wells Fargo has plummeted 53%.

“From a valuation standpoint [Goldman is] outstanding in our work, and a 2.5% dividend yield, whether they raise it or not,” said Tengler.

“I want to be leaning into these kind of sell-offs and buying some of these banks. Now technically if you unpack the chart of Citigroup, all you’ve done so far is sort of pull back to the uptrend support line off of those February lows and from our perspective, this is a stock that we think on this pullback that we should be buying. It’s also been a relative outperform against the XLF as of late,” Johnson said during the same segment.

Citigroup has rallied 18% this quarter. By comparison, the XLF financial ETF has added 8% over the same period.