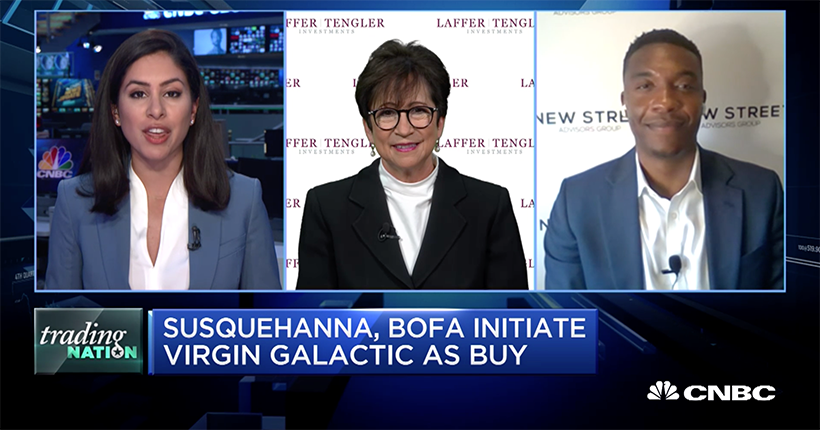 Wall Street is hitching a ride with Virgin Galactic.

Susquehanna and BofA Securities initiated coverage of the stock on Monday with a buy rating. Susquehanna analysts called Virgin an innovator of space technology, while BofA said its growth potential is “unparalleled.”

UBS says space tourism has the potential to be a $3 billion market by 2030.

Nancy Tengler, chief investment officer at Laffer Tengler Investments, told CNBC on Monday that the customer base may not be there just yet.

“I’d like to see people returned to commercial air flight before we spend too much time thinking about the potential although it captures your imagination,” shed said on “Trading Nation.”

“I understand why people are excited about it. Two hundred thousand to $250,000 a ticket, however, limits the potential clients, so I think we need to see them begin operations and that happens in the first quarter of 2021. And then see where we go from there and how this catches on.”

Tengler also highlighted its recent price action. The stock has rallied nearly 200% since a bottom last November; however, it is still more than 50% off its February peak.

In the same interview, New Street Advisors founder Delano Saporu said the stock’s fundamentals are keeping him away.

“The company still isn’t profitable. Commercial operations haven’t begun. But you know there is some compelling growth story, but we really want to see this play out over time, first and foremost,” he said.

Virgin Galactic will conduct its next spaceflight test on Oct. 22. If successful, the company may move forward with a flight with founder Sir Richard Branson in the first quarter of 2021 to kick off its commercial service.

“Right now, I’m sitting on the sidelines of this and kind of waiting to see how things play out,” said Saporu.