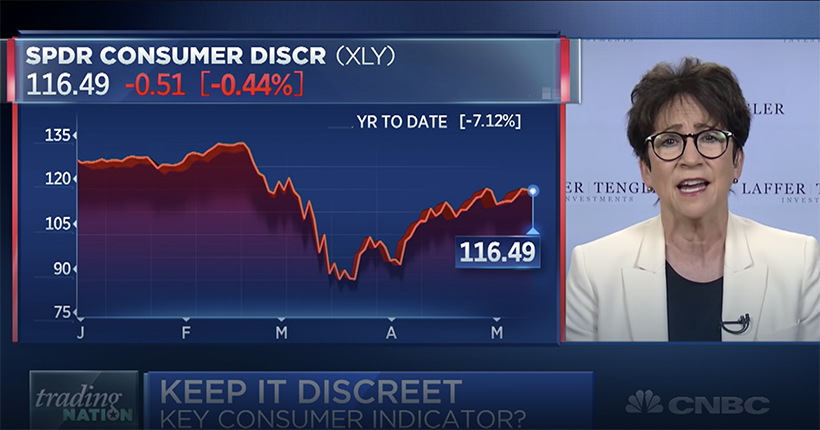 Traders are doubling down on the consumer discretionary sector. The Consumer Discretionary Select Sector SPDR Fund (XLY) is outperforming the S&P 500 year to date and is less than 15% away from its all-time highs as consumers in lockdown spend on platforms such as Amazon, the XLY’s biggest holding.

Nancy Tengler, chief investment officer at Laffer Tengler Investments, said her main worry about the XLY’s future performance was tied to Amazon’s influence over the ETF.

“We think Amazon has run quite substantially, obviously, and is going to have continued margin pressures. I mean, the business is growing, but it’s in the lowest-margin portion of the business where they’ve seen the most resilient growth during the shutdown,” she told CNBC’s “Trading Nation” on Tuesday.

Some of the XLY’s other holdings proved more attractive to Tengler, who said her firm used the recent sell-off to add “substantially to our cyclical growth exposure in the space.”

“We want to be overweight consumer discretionary. We are by quite a bit,” she said. “We were adding positions like T.J. Maxx and Target during the sell-off. We initiated a position in Chipotle, which is not a big portion of the XLY, but it’s run quite dramatically from where we added it. And then the sort of normal suspects like Home Depot and Starbucks were already large holdings for us and we added to them … for very different reasons, but with the same end result, we believe, coming out of this.”

In the next six months, Tengler sees a handful of online-focused retailers outperforming the pack.

“I think Home Depot has shown dramatic growth online as has Walmart, though it’s a consumer staple because of the grocery business. They’ve been growing quite substantially,” she said. “Ulta is a name that we also added recently and their online growth has been 20-30%. So, we like all of those names. We’re looking for the winners that benefit from technology — McDonald’s would be another one — and can in fact grow in the face of people sort of staying away from stores.”

Matt Maley, chief market strategist at Miller Tabak, agreed that home improvement retailers such as Home Depot and Lowe’s were good picks in this environment as the XLY ETF becomes an ideal indicator for consumer behavior.

He also said the XLY was nearing a critical juncture that could determine its next move.

“It’s moving up, and it’s moving up towards its 200-day moving average,” he said in the same “Trading Nation” interview, referring to the XLY’s chart. The XLY closed at $114.44 on Tuesday.

“If you look … over the last 12 months, that line, the 200-day moving average, had been incredibly important support for the XLY,” Maley said. “It bounced … at or near that level five different times last year. It finally broke below it when the whole market rolled over this year. It actually bounced right back up to it very briefly and then rolled over again. Now, … we’re there again.”

If the XLY can break above its 200-day moving average — $118.46 as of Tuesday’s close — old support could very well become new resistance, Maley said.

“If it can break above that line, it’s going to be very bullish, and it should be a bullish sign for what the consumer’s going to be doing as we move out of this lockdown phase in the economy,” he said.